My recent diatribe has caused me to reminisce about the past. I thought it would be nice to post some old UO stories.

This is a story of a pre-Trammel event that my good friend Danelle D’babrak had setup. She owned a nice Two-Story Wood and Plaster house near the entrance of Ice Dungeon. It was a very popular PVP spot in those days. 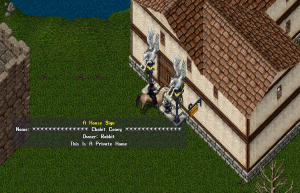 She had decided this week to allow the house to decay. The day it had turned to the “In Danger of Collapsing” stage there was quite a crowd. I think there were between 10 to 20 people there.

Now lets take a moment to explain an old game mechanic. Back then you could declare your house as public or private, but it worked differently. Public houses simply left the front door unlocked and let you place vendors. A private house still let people inside but they were flagged attackable to the owner and friends.

So the crowd had gathered and made their way all through the house due to the doors being left unlocked. A couple hours before the collapse was due to happen a situation presented itself where a person we didn’t like very much was almost trapped between some furniture. We prepared to attack and waited for the perfect moment.

When the time looked right I shut the front door and we struck. I can’t remember whether we killed him or not. We probably did. The funny thing is my closing the door refreshed the house. The jig was up and everyone went home.

But they came back the next time =]