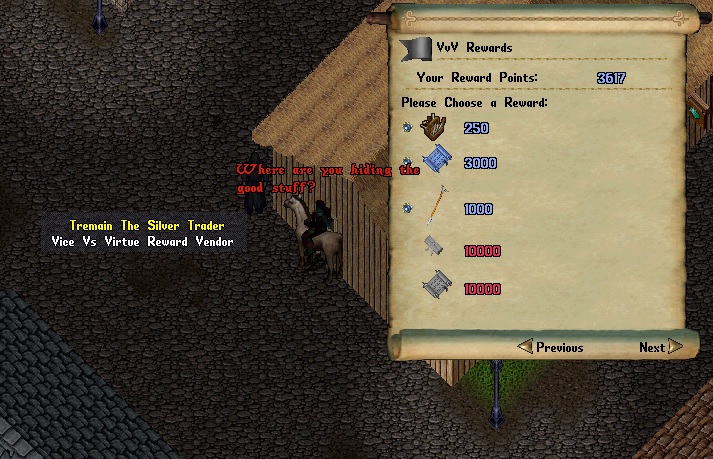 I was very excited to hear that something had finally been done to improve organized PVP. It has only been a paltry 14 years since Factions was introduced. They did make some changes to Factions (8-10 years years later) but it has been relatively unchanged.

So here we are with no more Factions. Now it is all about Vice vs Virtue. I really wish there was some more positive things to say about it. There was a lot of player input on its design. Unfortunately it just falls flat.

When I first heard about it I thought there were going to be two sides. But the reality is every guild is its own side. There is no good vs evil component which begs the question why it is even called Vice vs Virtue. I am not saying it is bad to have it this way. But as it stands it isn’t good either.

There is a little known feature in UO called guild wars. I know, this may be shocking to some. It has been around a long time. You will just have to believe me, this feature is not even documented on UOGuide. One guild can declare war on another guild and fight them in a semi-official manner. That is exactly how Vice vs Virtue works. Except there are no rewards for warring another guild. That is why no* one does it (*except for role playing).

Why do guilds not war? There is no leaderboard. There are no rewards. There is nothing. This is also largely why Factions died in popularity. There was some pretty cool rewards to start but they got old. Then Age of Shadows obliterated what tiny bonuses there were and things went unchanged for the next 5-6 years. But enough of that, lets get into why Vice vs Virtue is not working.

Each town battle is in its own self-contained bubble. When it is done you get some silver. Then on to the next town. No one is ever on top. There is no reason to fight for one town over another. There is no scoreboard. There is no urgency to defend a town. It is all just a grind to get silver.

As a player I am 100% uninterested in any rewards you can currently obtain with all this grinded silver. Lets go through them shall we?

Over half the rewards offered are decorations. The only half decent one is the pardon, but it is useful to very few people. And most of those people transferred their skills using soulstones and deleted the character.

There is also a serious hole in drawing people out to fight. With the system running 24/7 how do you know when someone is out there? It might seem like this method allows you to find a fight anytime. But when anytime turns into all the time, it is just the luck of the draw in running into an opponent. I just checked out Atlantic at 6PM and captured a town solo. In fact I have yet to kill another person in VvV at all. 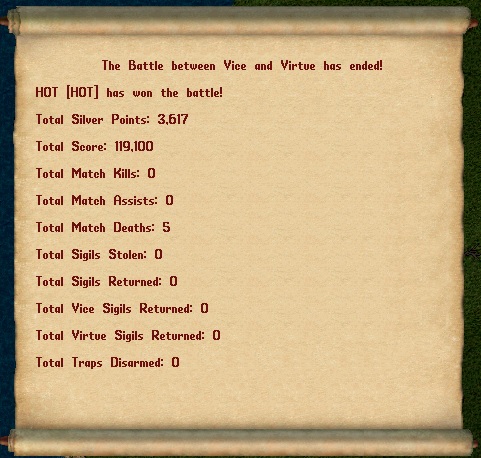 To summarize these are the issues that next to be fixed to draw people into this new PVP system:

I hope there is going to be a phase 2 in the near future to try and fix these shortcomings.