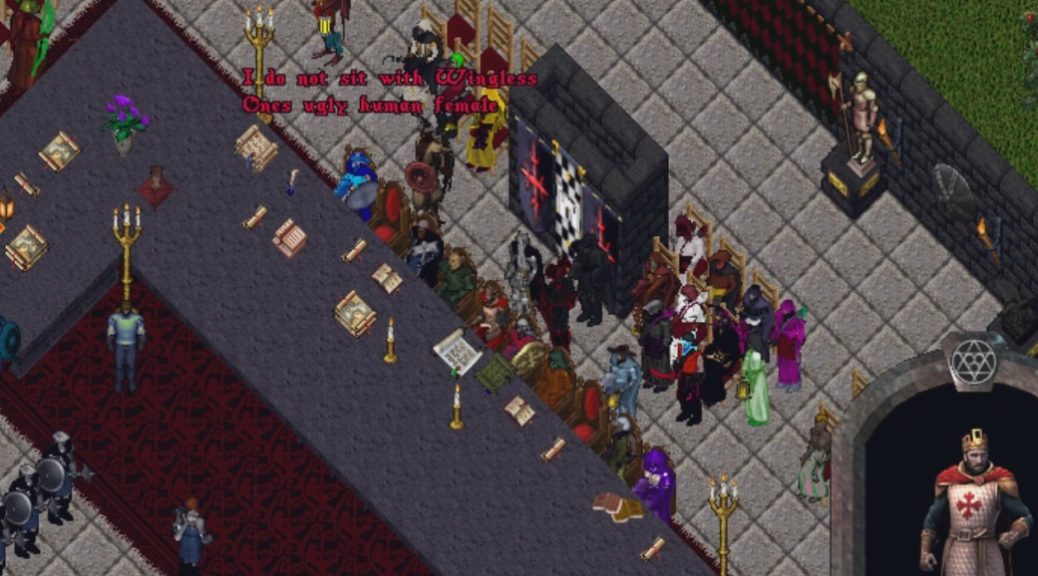 What a drama filled evening! The room was filled with unease and discontent among the governors. Between the first ever Gargoyle governor of New Magincia to the Dwarfs taking back the seat in Minoc to a heartfelt speech by Moonglow’s new governor to all the hate and tension with the Orc governor of Britain!

King Blackthorn kicked things off requesting advice on how he should deal with the leadership situation in the Crux Ansata. After the recent disastrous expedition that saw more lives lost than any other in recent memory, he sought to replace Lady Wellings as a commander.

The council could not come up with any good replacement for her. King Blackthorn thus decided to have Lord Dupre accompany Lady Wellings to offer advice and tactical counsel. However, this could lead to yet more tension and drama with the resentment directed towards Lord Dupre!

Governor Cauchemar of Trinsic brought forth that their jails were overflowing with prisoners. He wanted to re-enact the age old tradition of cannibalism, unfortunately that has been outlawed by Lord British for many years now. Instead they are going to be transferred to the Prison in Yew.

Governor Lavendar of Yew spoke of the upcoming prisoner transfer from Trinsic. There is also beginnings of a plan for a contest of archery to be held in August and a scavenger hunt in the fall.

Governor Zynia of Vesper announced the success of a recent fishing contest. It went so well the plan is to repeat it in August!

Governor Tatiana Thorn of Skara Brae said the city continues to prosper. She also it hosting a gathering each Monday evening at 9pm EST in New Haven to assist newer players.

Governor Parfu of Britain seeks to hold an event involving crafters and fighting. It didn’t really make much sense. Maybe the translation didn’t come out right? Keep an eye out for more details. 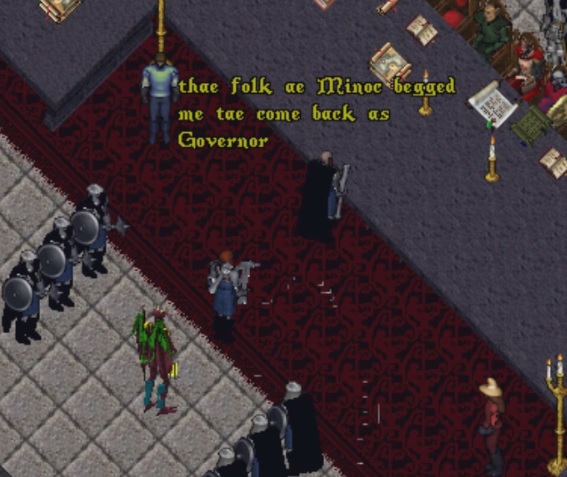 Governor Beldin Brightaxe of Minoc has regained his position in Minoc. Being a dwarf, it was also difficult to understand what he was saying. But that might have also been more of him not being able to see over the table. Next time he should bring a stool to stand on.

Brightaxe says the previous governor was not looking after the city. He also found a Chaos Banner inside the governor’s house. We look forward to what he can do for the city of Minoc. 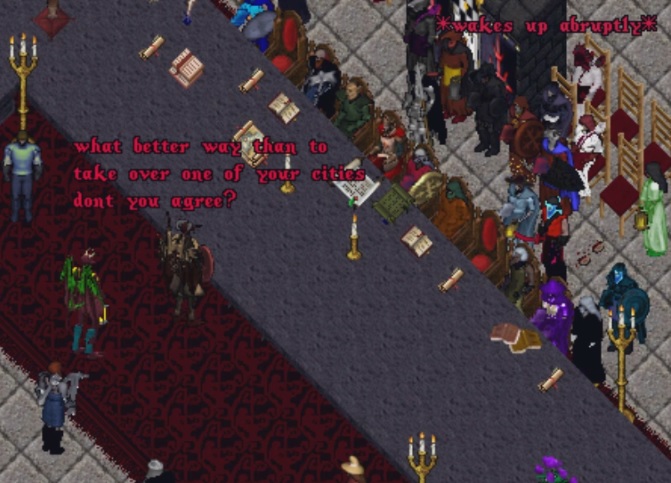 Governor Draxsom Pri-Lem of New Magincia has become the first elected Gargoyle governor in the history of Britannia!  There was a lot of suspicion of his motives. He spoke of “taking over a city” and “launching invasions”.  Once again, this may have been an issues with the translator. Or was it?

Governor Angelica of Jhelom says trade has been booming for the city, despite disturbances in the waters around the island. There was also an issue with the Bulls, but lets keep this report family friendly.

Governor JC the Builder of Moonglow started off with pleasant greetings to his fellow governors. But everyone knew that it would not last long. He immediately launched into an extensive statement about his concerns for the kingdom.

The reaction of the crowd and governors was divided. A more in-depth review of the speech will be reported on later this week!

We’ll have to see how this new racially diverse and divided makeup of governors will lead during the next 6 months. Keep checking back for plenty of reports on this and more.