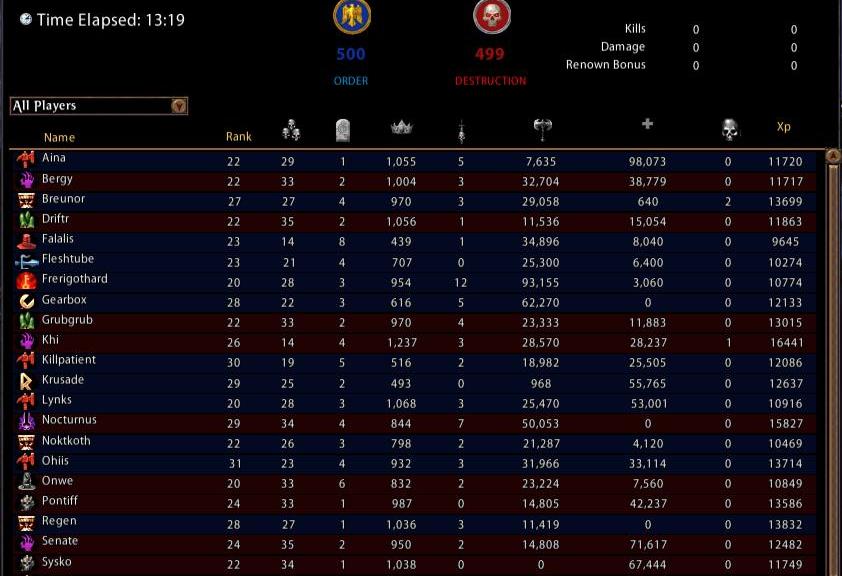 The original layout was quite boring. I am quite partial to this design. It is the same as the one I created for the UORares website. Over time I will make more adjustments as I think of them.

I was going to write about this yesterday but then the whole closing of Tabula Rasa thing came up. Might as well write about what is most relevant that day! For the second time ever (the first being Eve Online), I went out to see what all this new generation MMO hoopla is about. I should mention I tried World of Warcraft for 14 days several years ago, but never intended to pick up the game.

“Experience the glory of Realm vs. Realm! Declare your allegiance and join hundreds of thousands of mighty heroes on the battlefields of Warhammer Online” or so the website claims. War is not everywhere. When I played it was mostly in Battlegrounds………..errr……..I mean Scenarios. They are the exact same thing from the way everyone talks (I’ve never seen the inside of a World of Warcraft Battleground). Two teams fight over objectives and try to reach the highest score. The problem is it is the same thing again and again and again and again. Even if your team wins all the time, it can be really boring. Only 1 out of 10 matches I would estimate were really fun for me. Most of the time one side overwhelmingly crushed the other.

There were a lot of issues with the Scenario system. The biggest being that it relied on random chance for both sides to be equal. Unlike World of Warcraft, Warhammer Online restricts Scenarios to be from the same server only. That is a major flaw in my opinion. Players are always complaining how they want to do more than just the single one people farm experiance in. If they just made it cross-server, then this problem would be eliminated. The sides could be more balanced too because the pool of players queueing would be huge. Sometimes you can begin and know that loss is inevitible because your team has no healers or tanks.

When I stopped playing, I never saw a Scenario go off with more than 15 people. But there was room for up to 36 people. I would have loved to see one with 30 on each side. That could have been exciting. The kind of fun boasted about on all the advertisements. But most of the time you only have 8-10 people. Less when they start leaving because your side is not doing well.

The worst part about all this is Scenarios are required if you want to level fast for the end game. But it can either go really well or not be an option depending on the Order/Destruction balance on your server. There are quest and monsters to kill, but it just doesn’t go as fast unless you get with a group of people and run the risk of getting banned for killing mobs too fast.

All in all, I think Scenarios are one of the biggest issues in Warhammer Online at the moment but the developers don’t want to nerf them. Instead they are frantically trying to make open Realm vs Realm (which I will cover in another post later on) more appealing. But it has completely back-fired on them. Now “mortal enemies” are gaming the system and just handing the keeps you capture back and forth to farm the rewards. It is just a huge mess. 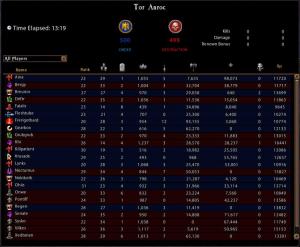 Too bad there couldn’t have been more matches like the one above ending with 1 point difference. One kill deciding the entire fight! Instead the spread averaged 200 points or more.